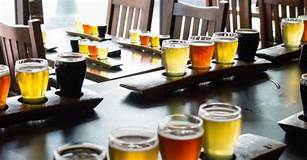 Our first Porsches & Pours event is going to be held at Garage Brewing Co.!  Established in 2013, Garage Brewing Co began brewing in what was once an eight bay garage at the end of Old Town Temecula near Temecula Valley wine country. The brewpub and taproom was aptly named Garage Brewing Co, not only due to its previous life, but to show an appreciation to where the craft beer industry originated — in the garages of brewers. Here, they have created a fun environment where their brew provides unlimited possibilities of flavor while bringing friends and family together. In 2016, they expanded their business and now have both an on-site brewpub in Temecula, CA, and an off-site, as well as a full production brewery.

At Garage Brewing Co, they maintain six core, year-round craft styles while also regularly rotating in seasonal creations for a total of ± 25 beers on tap at all times. As an independent brewery, they are free to modify beer recipes and develop exciting and creative spins on standard styles to please all types of beer advocates.  They routinely offer new and interesting craft brews to bring their customers a truly unique experience. ​With over 25 different styles of fresh craft beer on tap, they have grown to become Temecula Valley's largest brewery.

Enjoy a relaxing evening with Porsche friends in a fantastic brewery. You will get a flight of 4 tastings (excluding barrel aged beers) and light bites (boneless and bone in wings, french fries, tater tots, fried zucchini) at the cost of $30 per person ticket. There will even be trivia that night... team up with your Porsche friends (or meet new ones) and let's battle it out!  Please drink and drive responsibly.

There is limited space available, so please RSVP as soon as possible!  Register here: msreg.com/garagebrewery

Must be 21 and over to consume alcohol at the event.